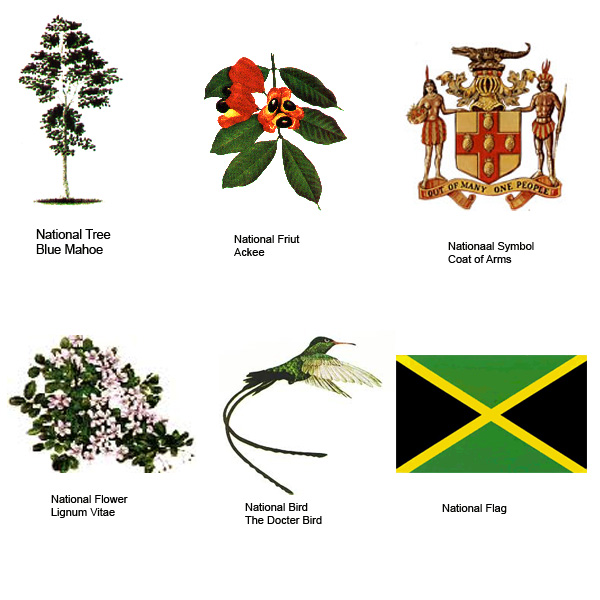 The Jamaica National Flag
One of the most popular national symbols of Jamaica, The Jamaica National Flag was first raised on Independence Day, August 6, 1962. It signifies the birth of our nation. The Flag brings to mind memories of past achievements and gives inspiration towards further success. It is flown on many triumphant occasions, showing the pride that Jamaicans have in their country and in the flag itself.

The Jamaican Coat of Arms
The Jamaican national motto is ‘Out of Many One People’, based on the population’s multi-racial roots. The motto is represented on the Coat of Arms, showing a male and female member of the Taino tribe standing on either side of a shield which bears a red cross with five golden pineapples. The crest shows a Jamaican crocodile mounted on the Royal Helmet of the British Monarchy and mantling.

The National Fruit – The Ackee (Blighia sapida)
“Carry me ackee go a Linstead Market, not a quattie wud sell” is a line in the popular Jamaican folk song ‘Linstead Market’.
Ackee is the national fruit of Jamaica as well as a component of the national dish – ackee and codfish. Although the ackee is not indigenous to Jamaica, it has remarkable historic associations.

National Bird – The Doctor Bird (Trochilus polytmus)
The doctor bird or swallow tail humming bird, is one of the most outstanding of the 320 species of hummingbirds. It lives only in Jamaica. These birds’ beautiful feathers have no counterpart in the entire bird population and they produce iridescent colours characteristic only of that family.
In addition to these beautiful feathers, the mature male has tow long tails which stream behind him when he flies. The doctor bird remains a colorful national symbol of Jamaica!

The National Flower – Lignum Vitae (Guiacum officinale)
The Lignum Vitae was found here by Christopher Columbus. Its name, when translated from Latin, means “wood of life” – probably adopted because of its medicinal qualities. The short, compact tree is native to continental tropical American and the West Indies. In Jamaica it grows best in the dry woodland along the north and south coasts of the Island.

National Tree – The Blue Mahoe (Hibiscus Elatus)
The Blue Mahoe is the national tree of Jamaica. It is indigenous to the island and grows quite rapidly, often attaining 20m (66ft) or more in height. In wetter districts it will grow in a wide range of elevations, up to 1200m (4000 ft.) and is often used in reforestation.
The tree is quite attractive with its straight trunk, broad green leaves and hibiscus-like flowers.

Warning: Use of undefined constant trek - assumed 'trek' (this will throw an Error in a future version of PHP) in /home/customer/www/traversejamaica.com/public_html/wp-content/themes/trek/comments.php on line 16