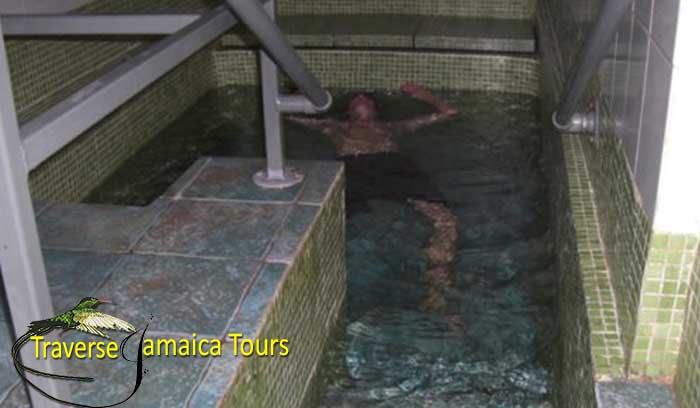 Enjoy a Scenic Ride from Ocho Rios to Milk River’s Mineral Bath and conclude with Lunch at Port Royal
About Milk River
The Milk River baths in Jamaica is said to have one of the highest radioactivity levels of any mineral bath in the world. Analysis of the mineral spring shows it is more radioactive than the leading European spas, Baden in Switzerland and Karlsbad in Austria. The bath is re-known for curing many ailments including – Sciatia, Lumbago, Gout and Liver disorders.
The origins of the bath is very interesting, rooted in Jamaica’s slave history. The story begins with a slave owned by a man named Jonathan Ludford. He was beaten by his master and ran away into the forest .The slave came upon the Milk River Bath and washed his wounds. The bath soothed his wounds and they began to heal. Upon returning to the slave village his slave master agreed not punish him if he told him the location of the spring. The area was then fenced off and this slave was given the duty to guard it. The property that the springs were on, were later willed to the government. They built the first bath on the property in 1794 and opened it to public that year. Currently there are 9 baths and a hotel on the property. Today the Milk River Bath is visited by locals and patrons from all over the world for its renowned healing power.

About Port Royal
Once known as the ‘Wickedest City on Earth,’ Port Royal on the island of Jamaica was one of the largest towns in the English colonies during the late 17th century. It was a haven for privateers and pirates, such as the famed Sir Henry Morgan, due to its excellent geographic location in the middle of the Caribbean. From Port Royal, these buccaneers preyed upon and plundered the heavily laden treasure fleets departing from the Spanish Main.

Unfortunately, the glory of Port Royal was short-lived. On the morning of June 7th, 1692, a massive earthquake hit Jamaica. The tremors rocked the sandy peninsula on which the town was built, causing buildings to slide and disappear beneath the sea. An estimated 2000 Port Royalists were killed immediately in the disaster. Many more perished from injuries and disease in the following days.
From 1981 to 1990, the Institute of Nautical Archaeology, in cooperation with the Nautical Archaeology Program at Texas A&M University and the Jamaica National Heritage Trust, began underwater archaeological investigations of the submerged portion of Port Royal. The following pages highlight what we have found so far. The last excavation season was in 1990 and no further excavations are planned.
(1) Beach Towel
(2) Camera
(3) Cash for shopping/ Tips (4) Sun Screen
_____________________________